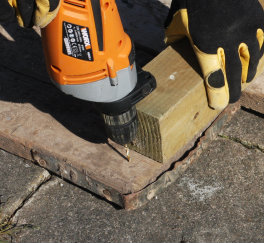 Why an Asparagus Raised Bed? Pros and Cons

The fact is that asparagus roots will grow downwards by 1 to 2 meters that's up to 6 foot in old money. If you have a nice loam or free draining sandy soil the roots will be quite happy to bury their way down so long as you have dug to a depth of 18 inches to a foot before you planted them. However, if like us your soil is heavy and in our case stick together by lumps of stone then the roots have a bit more of a challenge ahead of them.

In order to give them every chance we decided to dig deep with a mechanical digger, add as much leaf mould and compost as possible to break up the soil and then add come extra depth on top by building upwards in the from of a raised bed. We don't think growing asparagus in a raised bed is the ideal choice but with less than ideal conditions this was our solution.

The downside to raised beds include that in dry weather they will dry out more quickly and in cold weather the soil will be colder (but asparagus is pretty hardy so this is not a big issue). As asparagus fern grows quite tall another down side is that it could be quite exposed, however, our walled garden is very sheltered so we think we are OK on that count.

Finally cost, if you don't have the materials to make a raised bed to hand or enough compost to fill it there will be costs attached especially if you want one of any size. Happily we had everything apart from the digger to hand at zero cost.

When we first bought our house it needed a lot of work doing and we ended up owning and storing some scaffolding and scaffold planks. They've been sitting in our store shed for quite some time and we need to clear them out. We have a few people interested in the scaffold poles but the planks are being recycled and turned into our raised bed. ( Not only that but they are also making us a new compost heap!).

As we never throw anything away we also have some old fencing posts lying around. These have been cut down in length to about 50cm and will make the corner posts.

We decided our space would support a bed 2.7m long by 1.7m wide. Our planks were 9" wide so we had the choice of a 9" or 18" depth to the raised part of the bed. The extra compost from our neighbours garden (see our first instalment) enabled us to go for an 18" deep bed two planks deep.We cut four planks 2.7m long for the sides and four planks 1.7m long for the ends.

The corner posts were made of 3" square section posts cut to 21" long. We cut four of these. We made them slightly longer than the depth of the bed initially but might cut them down to level with the plans in due course.

Mike pre-drilled holes in the planks ready to screw the wooden structure together. He measured where to pre-drill the holes by lying a piece of the corner post on the plank and drilling in the middle of its width.

We then put together one long side of the bed flat on the floor. This was quite easy to move and we propped it up in place.

We then attached the first two end planks on one end with the planks where they were to stay. Having an extra pair of hands to hold it up was useful.

Then the third corner post was attached and we had a pretty stable structure across two sides of the bed.

We steadily filled this two sided structure bringing compost over from next door in his little trailer.

Making the first side before moving into place 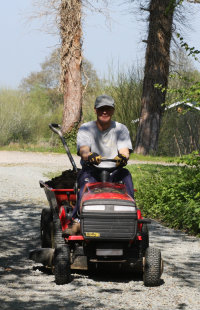 Bringing extra compost from next door

This saved a lot of wheelbarrowing. Having only two sides built left us able to drive the trailer right up to the bed and tip it straight in. This saved a lot of lifting to get the compost into the bed. As we added the compost we dug it over layer by layer to mix it with the lower layers as much as possible. We dug the compost across to the far side of the bed so that we had space to fix the final two sides of the bed in place before digging the soil out evenly across the bed.

We were happy to note as we were digging what a lovely sunny spot it was and how sheltered it was from the easterly wind blowing that day (just right for an asparagus raised bed). 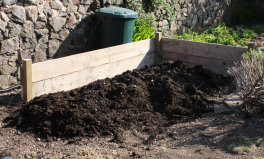 2 Sides in place and we could still tip compost into the bed without having to maually lift it with a spade.

Do be careful if using home made compost that you are not introducing weeds to your raised asparagus bed. The compost heaps we were emptying all had some nettles growing in them. We pulled the nettles out and were pretty fastidious picking out tiny and not so tiny pieces of nettle root. Nettle roots are pretty easy to spot and well worth getting out. We also came across some patches of potatoes doing their best to grow, obviously these had been thrown on as kitchen waste. Again we pulled out any root systems we found as we went along.

Follow the Links below for more Advice on Growing Asparagus