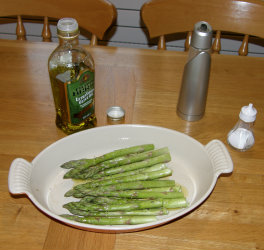 Roasted asparagus is a good alternative to steaming which just involves cooking asparagus in the oven with a little olive oil or butter. It takes a little longer than steaming just because you need to allow the oven to pre-heat, but the resulting oven roasted asparagus is very tasty and adds a different way of presenting a fantastic vegetable to your friends and family.

So...How to roast asparagus.... you need a conventional oven, and a shallow baking dish, it is worth mentioning that it is a good idea to place some aluminium foil on the baking dish in which you are going to place the asparagus. The idea of the foil is that it keeps the asparagus spears in a relatively small area and it makes it much easier to clean up after cooking.

Rinse and prepare the asparagus as usual, obviously depending on how hungry you and your guests are determines how many spears you need to cook. – I like to work on the basis of three to six spears per person!

Lay the asparagus spears out on the foil or dish, drizzle olive oil over the spears and roll the spears in the oil to ensure that they are all covered in a thin layer of oil. Sprinkle the spears with salt and pepper to taste. Alternatively you could rub a little butter over the spears.

If you wish you can sprinkle with some freshly minced garlic, but this is not to everyone’s taste.

Place the baking dish in a preheated oven at 400F, 200C. If you have a fan oven then you need to adjust the temperature accordingly (probably about 20 degrees C lower. Cook the asparagus in the oven for approximately 8 – 10 minutes; this does depend on how thick the asparagus spears are. The spears should be lightly browned and nicely tender. Check with a fork to ensure that they are cooked to your taste.

Using oven gloves, remove the baking dish from the oven and instead of adding butter you can drizzle the spears with a little fresh lemon juice for a change.

Cooking asparagus in the oven may not be the most conventional way of cooking it but it does allow you to experiment with adding various herbs and seasonings. Next time you are planning a meal try oven roasted asparagus.

Home › How to Cook Asparagus › Roast