A History of Asparagus

The history of asparagus goes back a long long way. The derivation of the word Asparagus gives us some idea of its early history.

The word asparagus is rooted in Ancient Greek where the word aspharagos can be identified in various literature with two meanings. The first found in Homers Illiad is used to mean throat or gullet whilst the second is referred to as the edible shoots of stone sperage or Asparagus Acutifolius. The word asparagos without the h is also Greek and means of obscure origin.

We have seen reference to the fact that at one point the greek word referred to the young edible shoots of any plant that shoots up from the earth but can't verify this fact.

The Greek developed into the word asparagus in classical Latin but was then shortened to sparagus in medieval Latin. According to World of Wide Words It first appeared in English around 1000 AD and by the 16th century it was  commonly referred to in Engliash as sperach or sperage.

At this point in common with some other English language developments there was a reversion to the classical Latin roots encouraged by academics and herbalists and so Asparagus came back into use.

Not content with going full circle in common use the "a" was dropped and the words 'sparagus, 'sparagrass and sparrowgrass became widely used with grass another shortening still used today.

Asparagus is believed to be seen in an Egyptian freeze dating back to 3000 BC and is said to have been known in Syria and Spain.

The ancient greeks ate wild aparagus for it tender shoots but it was the Romans who first started to cultivate asparagus more than 2000 years ago. Julius Caesa is alleged to have eaten asparagus with melted butter,

Just as we do, these early adopters enjoyed eating asparagus in season but they also dried it for use in the winter. The Romans are said to have frozen asapargus in the Alps for the feast of Epicurious (roughly in January / February) transporting it there by fast chariots and runners whilst the Emperor Augustus is said to have built a fleet of ships to transport Asparagus around the Roman Empire.

Th oldest surviving book or recipes is said to be Apicius's "De re coquinaria" and contains a recipe for cooking asparagus.

As well as growing asparagus for its culinary delights the Greeks and Romans considered it to have medicinal qualities.

The phrase "velocius quam aspragi conquantur" means to eat something faster than the time taken to cook asparagus and is attributed to the Emperor Augustus.

16th Century and the History of Asparagus

After the demise of the Roman Empire little is heard of regarding the history of asparagus for a while, evidence suggests that asparagus was being grown in French monasteries in 1459 but it is unheard of in England or Germany until the mid 1500's.

In the 16th Century asparagus starts to appear in the history books again. It has reached France and England with Louis XIV of France allegedly having special greenhouses built to grow his asparagus.

As quoted above Samuel Pepys the famous diarist records buying a "hundred of sparrow grass" in Fenchurch Street , London in 1667.

It is thought that colonists brought asparagus to North America in the 1700s planting it initially in New England. By the 1850s it had found its way to North California.

West Brookfield in Massechussettes believe's that Diederrick Leertouwer may have been the first to inttroduce asparagus to New England. Ruth Lyon a local resident and writer has done some research and tells her story here.

In her research and passion for asparagus history Ruth has also learnt about Asparagus Etiquette and collected some stylish and interesting asparagus serving ware. 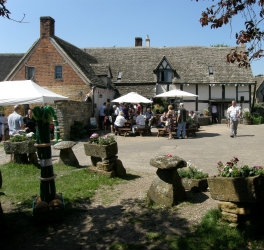 Evesham in Worcestershire is one of the main Asparagus Growing regions in the UK and the village of Badsey is home to the Badsey Growers Society and has some interesting collections of information on the history of asparagus. According to their pages and to Terry Sparrow author of "Digging for a Living" asparagus was grown in the area as early as 1768. He tells of W Pitt author of "General view of the Agriculture of the County of Worcester" 1813 recording seeing several flats of asparagus in the fields. This is thought to refer to a large streth of level ground. Then in 1830 the Royal Horticultural Society awarded a medal to Anthony New for asparagus exhibited at the Vale of Evesham Societey show.

This same site hosts an interview with Lorna Howarth (nee Bayliss) who talks at length about her childhood as the daughter of Enos Bayliss (1881 -1964) a market gardner in the Vale of Evesham.

She talks about some of the traditional methods of tying and packing as well as the ardures of keeping up with cutting the crop.

Evesham remains a centre of asparagus growing in the UK and hosts the British Asparagus Festival.

Spargel as the Germans call it took hold in Germany around Stuttgart in the 16th century around the same time that it was taking off in the UK. Initialy it was grown exclusively for the royal court earning its nickname "Konigsgemuse", royal vegatable.

Schwetzingen one of the two primary spargel growing regions in Germany is where Karl Theodore, Prince Elector started a green asparagus growing copmetition amongt the princes in the 17th century whilst Schrobenhausen another city steeped in asparagus history houses the European Asparagus Museum.