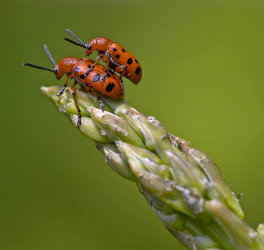 The common beetle which is the most prevalent and causes the most damage has a red body with a black back with creamy / yellow splodges. The common beetle's spotted cousin is less prevalent and less harmful and is red with 12 black dots on its back. Both are just under 1 cm long when fully grown. Do not mistake them for ladybirds!

You DON’T want them on you plants as they will eat the foliage and gnaw the bark, the effect of this can be that the foliage goes yellow/ brown and dies off and ulitmately a weakening of the plant and lower crops in future years. The weakened foliage will also be more susceptible to Fusarium which is a fungal pathogen (or asparagus disease) to which the plants are susceptible.

The larvae of the common beetle are a creamy greyish colour and those of the spotted beetle are orange.

The beetles look for sheltered places to overwinter and then go through two cycles of laying eggs, pupae developing,beetles etc. through the summer months.

The spotted beetles are less troublesome as they come out a bit later and feed on the berries rather than the ferns and spears.

If you are like me you would prefer to keep your asparagus plants clear of these pests without using chemicals there are ways to try to defeat them.

One interesting method I saw suggested was to surround your beds with netting and let chickens forage around the beds. All fine and dandy if you happen to keep chickens! It sounds very organic but I think we need more practical measures for most of us!!

If you can keep numbers down by being quite vigilant you should be able to keep them at bay by removing individual beetles that you see and popping them in a pail of soapy water. You should also wipe away any eggs you see either on the spears or on the leaves of the ferns later in the season. Look out for the beetles in the afternoon when they are most active.

Try to avoid using chemicals to treat them as the chmicals are likely to kill some of your natural helpers. Ladybirds and tiny wasps will prey on the beetles if you haven't killed them off with spray. Also try to attract birds into your garden. They will help you by eating all sorts of bugs that are after your veg!

If all else fails and you go the chemical routes be sure to follow the instructions. You need a pyrethrum based insecticide which you should try to use in the evening when bees are less active since they will also be affected by this spray.

Caring for your Asparagus 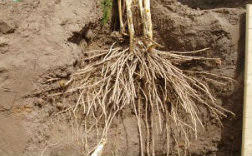