Asparagus Festivals around the World

Empire Festival (3rd Weekend in May) 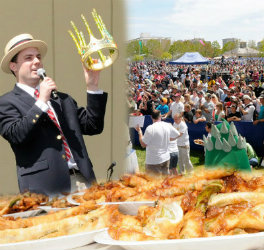 What other vegetable or food has festivals in its honour? I thought the answer to this question would be that apart from the obvious beer festivals and general food festivals plus harvest thanksgiving individual vegetables would not have their own dedicated festivals .....how wrong could I be. A very quick trawl of the net found me a cucumber festival in Suzdal Russia with a cucmber eating competition; a tomato festival in Buno Spain where the highlight is a tomato fight and the local population grows from 9,000 to 30,000; and a lettuce festival in Yuma Arizona although I have to say this last one sounded like a general food festival with less emphasis on lettuce than might be expected!

So now I am less suprised that asparagus has its own festivals. 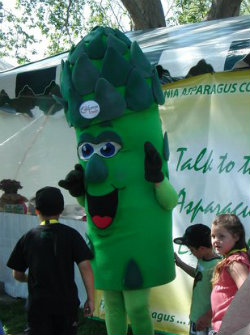 California hosts the Stockton Festival dedicated to asparagus which seems to be the biggest festival with activities on a grand scale whilst the British Asparagus Festival remains a fairly typical rural afair. West Brookfield in Massachusettes and Empire in Michigan host festivals which sound like lovely local events and Oceana County Michigan is host to the National Asparagus Festival.

The Germans meanwhile get very excited about their prized white asparagus. Baden-Württemberg, in the southwest corner of Germany is the home of German asparagus where the sandy soil lends itself to growing white asparagus. They have created an "Asparagus Road,” and associated cycle route which takes you through a number of asparagus producing towns from Schwetzingen to Scherheim via Reilingen, Karlsruhe and Rastatt. There are a variety of festivals along this 136km route and during the short season almost every restaurant and eatery in the area either has asparagus on the menu or a special asparagus menu. 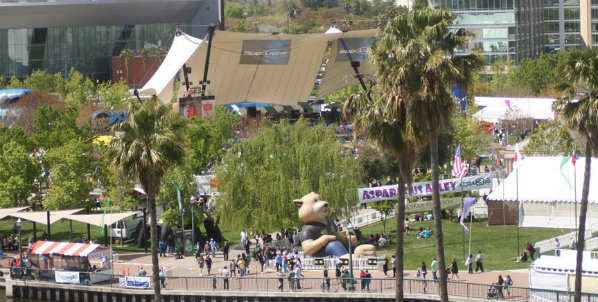 All sorts of web pages tell me that "Europe's largest festival dedicated to asparagus is held in Bruchsal, which lies on the Upper Rhine plain on the edge of the Kraichgau hills" but i can't find any more detail than that. Even the Bruchsal town's own website does not mention it. Has anyone been to it? Does it exist?

If you know of any other asparagus events of note please let me know and I will write a few words about them here.