Asparagus Season
(too good to miss) 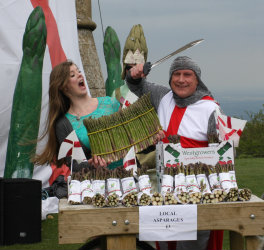 Marking the start of the Asparagus Season on St George's Day

Asparagus Season doesn't last long wherever you are but it's a lovely time of the year and not just because of the asparagus.

Cutting of asparagus spears can only last for 6 to 8 weeks for any one plant without weakening it for the following years production so our farmers have to work at using different varieties to lengthen the season for us.

When is the Main Asparagus Season?

Asparagus starts to shoot up when the soil is warm enough in spring. A temperature of about 13 degrees Centigrade is generaly needed.

The timing of the season is therefore determined by geograpahy with those areas that get spring first getting their asparagus earlier than cooler climes.

As such California is one of the first of the Northern Hemisphere locations to start its season with the first light harvests starting as early as February.

In the UK the season is traditionally said to run from St George's day 23rd April to mid-summers day 21st June and is heralded by opening celebrations in the Vale of Evesham. In practice along with farmers around the world British farmers are using poly tunnels and early cropping varieties to provide the widest possible season from March in a warm spring to July after a cool start.

Inevitably the southern hemisphere season occurs in their spring starting in September and winding up to high season through October/ November / December and lasting into the new year with the right varieties and locations.

In recent years growers in the UK have been sucessfully producing a second crop for the supermarkets in the autumn. With only limited production at this time of year you will be lucky to find any but it is on the shlves of some lucky customers.

Our understadning is that the basis of producing a second crop is around resting the crowns at the right time and then encouraging them to grow in mild, damp  autumn conditions (effectively fooling the plants into thinking it is spring). Ensuring that the plants have time to grow the fern that provides the energy fro the following seasons crop must also be managed.

We now see asparagus on the shelves of our supermarkets 12 months of the year. Out of natural spring time much of this produce has traveled a long way around the globe with Peru and increasingly Mexico responsible for the imports.

Peru produces year round asparagus in naturally dry conditions by irrigiation, resting the crops and allowing fern production on a rotational basis. The effects of this on the local environment and economy are complex..... read more