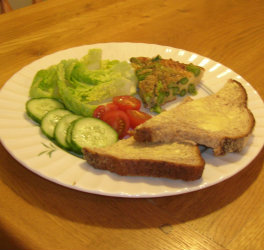 Before you read our asparagus frittata recipe some of you might be wondering the differences between and an omelette and a frittata :

In addition the finished product will usually be cut into slices and served to a number of people rather than being cooked and eaten as a whole for one serving.

With this asparagus frittata recipe its all about the asparagus rather than the eggs. I cooked it in quite a small frying pan so that the asparagus was stacked high before the egg went in raw over the spears. This gives a high density of asparagus with a nice light egg mix around it. It also makes it deep enough to slice and eat with your fingers from a lunch box once cold.