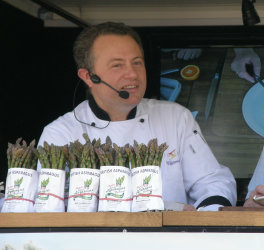 The British Asparagus festival 2012 got under way on the day that is generally recognised as the start of the asparagus season (23rd April 2012 St Georges day) with the Great English Asparagus Run a “100” round of the finest Vale asparagus being transported “Asum style” from the National Trust Property The Fleece Inn, Bretforton to Stratford Upon Avon.

On Saturday the 5th May things were supposed to really get going with The British Asparagus Festival Day which was advertised as “an afternoon and evening of asparamadness in the heart of asparagus country”. Its was meant to start at 4pm with activities to include Asparagus cookery demonstrations, the King of Asparagus competition along with typical British festival entertainment, boat trips on the river Avon and a range of refreshments.

Unfortunately this is what our page showed in May 2012 after weeks of heavy rain...boy did it rain in 2012!

Saturday 5th May Event cancelled due to lack of asparagus in the cold weather and flooding.

Hopefully the Sunday 27th May event will take place with some activities from the event on the 5th transferred to that date.

Luckily by the 27th May the sun came out and a glorius day heralded an afternoon and evening of Asparagus Festivities. 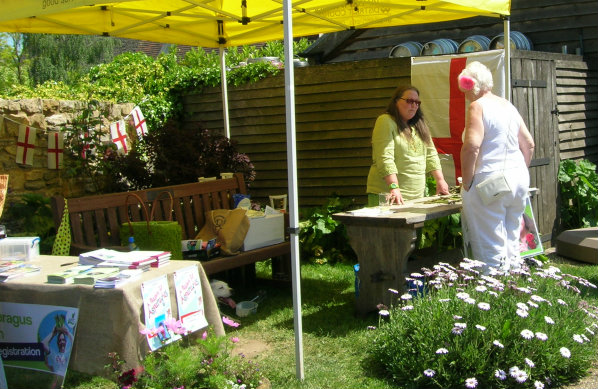 3. The Olympic Games will enjoy excellent weather and the British Olympic team will enjoy great success.

4. Not one but two Royal pregnancy announcements. 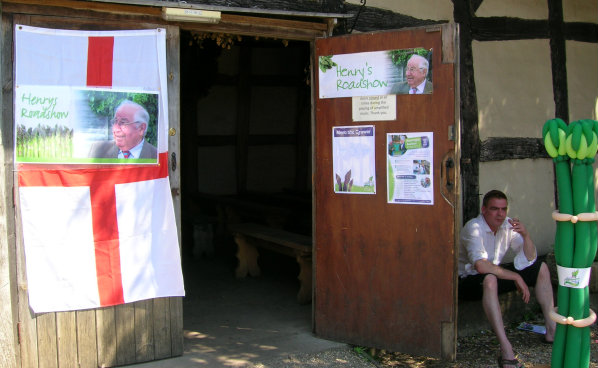 A very intersting talk about the history of the Fleece Inn was followed by another interesting sessionwith Henry Sandon well known as a TV personality from the antiques road show and a local man with an amazing knowledge of porcelain and all things related. 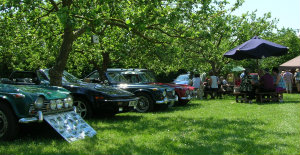 Gus went from looking very cheery to rather hot as he told his Asparagus stories (it was very very hot! ) and there were a series of cookery demonstrations. The Fleece Inn must have done a good trade in cool drinks as the afternoon managed to be one of very few hot sunny days of the year and people sought the shade of the fruit trees to enjoy their day out.

The food at the cookery demonstrations found its way into the audience and a few brave souls joined in on stage.

The village of Brentforton in Worcestershire where the festival is held is a real little gem of Englishness all by itself. We spotted some local wildlife on the roof of one of the thatched cottages! 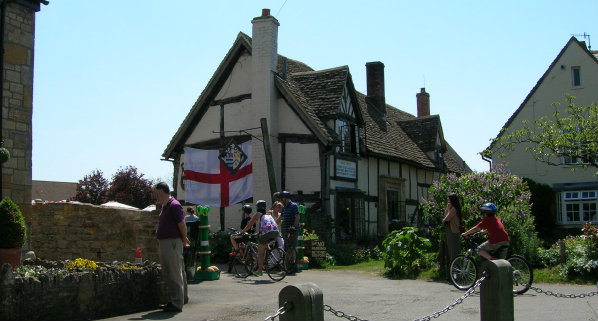 And arrival by bike seemed like the perfect mode of transport for such a beautiful day.

Other events included a second asparagus auction on the 3rd June 2012 following an outdoor Church service with the Bretforton Silver Band playing and a series of Asparabus Coach Tours provided a chance to take a guided tour around the Vale of Evesham a major producer of British Asparagus.