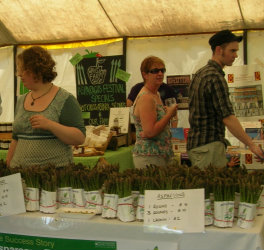 The Vale of Evesham has hosted the British Asparagus Festival for the past 8 years (including 2013).

It started in 2006 supported by the British Asparagus Growers Association as the Vale of Evesham Asparagus Festival but aquired the British Title very quickly.

The festival currently boasts a turn out of around 8000 which sounds quite a lot until you compare it to the Stockton Festival which attracts tens of thousands and contributes a significant income to the local economy.

With two bank holidays in one at the beginning and one at the end of May and in some years with Easter towards the end of April there is ample opportunity for the festival to be celebrated in good British bank holiday style. This generally means a weekend of a mixture of traditional britishness...in this case a mixture of cookery demonstrations, asparagus Auction, brass band, Gus the Asparagus Man, Vintage Cars &Bikes, the Hook Norton Horses, Barn Owls, Face Painting, Morris men and all things rural mixed in with whatever the theme is. In this case Asparagus. Of course it also potentially means a mixture of sunshine and showers with the occasional heatwave and thunderstorm!!

Inside the Asparagus tent you might find Gus reading Asparagus stories to a younger audience, a display of Asparagus themed artwork by the children of the local school or a range of produce with Asparagus as an ingrediant.

Not to be confused with a cahrity fun run this run usually involves a run in a Morgan Sports car. The annual Asparagus run is the opening event of the Festival and starts at the Fleece Inn. A round of asparagus is the start of the show and amongst a lot of razamataz involving Asum dancers, Gus the asparagus man and the local brass band the round is given a send off to be "run" to some place of note. In previous years recipients have included  Fortnum and Mason and the Queen who recieved the round in her jubillee year.

A key part of the event around which the various activities are built is the Asparagus Auctions which are held at the Fleece Inn Bretforton which is a National Trust property. Here a round of asparagus is raffled followed by the auctioning of bunches of asparagus. The public are very generous in their bids and the bunches go for well above market value in aid of supporting the local brass band.

A new innovation in 2013 was Asparafest, a weekend of music, country life and, of course, asparagus. Other events included in the British Asparagus Festival have included tours of Asparagus Farms, an Asparagus Fun run, a bike ride, you name it there is fun for all.