Stalking Diedrick’s Asparagus is a lightly edited extract from a piece written by Ruth Lyon a writer and resident of West Brookfield. She has kindly agreed to allow us to publish her work here providing us with a tantalizing glimpse of the history of Asparagus.

If you have a story about any aspect of Asparagus History we would love to hear from you.

“West Brookfield - This story's beginning should be "Once upon a time," because we're still scouring local and horticultural history to discover the true facts of the matter.

In this town's Old Indian Cemetery, a large gravestone marks the grave of one Diederick Leertouwer. This we know. He came to this country in 1784, arriving in Boston, to promote trade between the Netherlands and New England. He lived with his wife and daughter in West Brookfield from 1794 until his death in 1798. Shortly thereafter, his wife, Christina and daughter Maria returned to Holland. 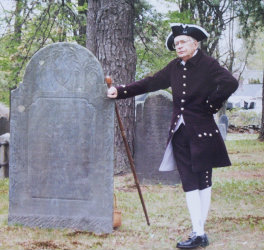 Will Earley stands at the grave of Diederick Leertouwer, who died at age 38 on August 24, 1798

Was it green? Local legend has it that Diederick Leertouwer imported asparagus from his homeland and was the first to plant it in this area or perhaps this country. This fact was forgotten until it was discovered in an old cookbook, or so the legend proclaims. Unfortunately, no one knows the whereabouts of that cookbook. Some believe it was an old Congregational Church cookbook.

Lending some credence to the tale is the fact that Diederick, with his friend and partner James Huyman, owned and operated more than one business on Foster's -  and later Greene's - Wharf in Boston. Their company imported goods from The Netherlands and sold them at a business named The Dutch Store. He could have easily imported asparagus seeds or roots for himself  and to sell.

Some of the people you meet will inform you that they still have strains of the original asparagus growing  wild in their yards.

Well, do they?  We've been doing some serious investigation on the subject of Diederick and his favorite crop. We haven't all of the answers yet, but we know for certain where he lived, and a little bit about his life here - more about that later. But, about the asparagus -

Was it green? Most experts on the subject agree that asparagus, as enjoyed in  Europe in the 1700s, was white. Gardeners all know that white asparagus is white because it is buried so deeply - the tips are never exposed to light  at harvest time- thus photosynthesis  does not take place, thus the tasty spears are white. Records indicate that most of the asparagus consumed in Europe in the 1700s was white  - it was considered the proper manner in which to serve it. The preferred stalks were thick - sometimes as much as two inches in diameter- and were peeled prior to cooking. The sandy saline soils of Germany and Holland were considered ideal for asparagus - huge crops were raised, harvested, sold,  and exported.

Did Diederick import it to this country? Very possibly, even likely. Lynne Oliver, editor of The Food Timeline*responded to our query thusly:  "Our food history sources confirm asparagus (Asparagus Officinalis) was introduced to the New World by Dutch settlers, but they do not pinpoint the exact varieties. Information gleaned from artwork confirms there were several types/colors available".( It 's interesting to note that, since the time of the cavemen, art has been used to record, admire, and finally, research the culture of those who've gone before us.)

Was Diederick's asparagus the first? Possibly he introduced it to New England, but probably it had already reached New York. We know it was enjoyed by Virginians George Washington and Thomas Jefferson. According to  Dutch food historian Peter G. Rose, New Netherlands foodways expert:

"Although Asparagus Officinalis has many varieties, among them green, white and purple types - deep-planted white asparagus were far more frequently shown in Dutch paintings. The white variety, with its almost meaty flavor and steak-like price, is a primeur, a seasonal vegetable in the Netherlands in early spring...In the New World, Adrien van der Donk, in his Description of the New Netherlands of 1655, lists asparagus in the herb garden ...seeds for all sorts of plants were brought by the first Dutch settlers and also shipped back and forth between the colony and the homeland."

Peter Rose, who is, incidentally a female, co-authored the book Matters of Taste: Food and Drink in Seventeenth-Century Dutch Art and Life with Donna R. Barnes (Syracuse University Press: Syracuse NY 2002) She is an artist as well as an historian. Her focus in on the early history of the Dutch in New Netherlands.

In her very friendly and interested response to my queries, she wrote, "I think your local legend could very well be accurate, and he wrote home to ask for seeds. I think definitely seeds, not roots. When I checked Dutch sources that is all they talked about - asparagus grown from seeds. Some sources emphasize that the large scale production of asparagus in the southern Netherlands began in the early 19th century, though as you saw in the paragraph of Matters of Taste, asparagus were brought to New York in the 17th century and were grown in the homeland as well."

In my query letter, I'd explained my interest in Diederick's legend here, and I'd especially inquired about the seeds, as we all know that it takes years to raise asparagus from seeds, but she felt emphatically that was what Diederick would have done. Perhaps he never got to enjoy his crop - he only lived in West Brookfield for four years. Still, he may have raised it in Boston as well, and brought roots to his home here. All accounts I've discovered in our library and historical commission papers state that he imported roots, not seeds. However, all of those accounts are hearsay, written in the 20th century.

As local people all know, some folks who live near the location of his house on South Main Street (toward the "Y" end of the common) and in the Foster Hill area claim some of his asparagus still grows there. Perhaps.

Rick Giordano of All Hill Farms, gardening expert at Old Sturbridge Village, where he maintains the herb garden and other spots, says there's no telling as to that heritage. Every plant that grows in a garden or field differs to some degree from every other plant; in an uncontrolled environment, there are just too many variables, he says, to ever determine a particular plant's ancestry, especially over centuries.

Christy Higginbottom, gardener, plant historian, and gardener at OSV for many years, informs us that the variety of asparagus grown in the garden at the OSV parsonage is "Barr's Mammoth", which appears in 1865 seed catalogs. That's about as early as you'll find asparagus in any American seed catalog, she says.

We'll continue to investigate. We've learned much about the Dutchman who lived among, did business with, and formed affectionate friendships with West Brookfield's leading citizens of his time. We'll share those stories with you in issues to come. 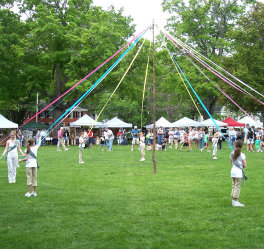 The West Brookfield Asparagus & Flower Heritage Festival which started some 12 years ago has been decidated to the honour of Diederick Leertouwer. His time here was short, but his green legacy lives on. Maybe."

Follow the link above to learn more about the festival.